We recently hosted 4 UCL students for a couple of weeks as part of their Global Active Citizens Programme – Alyson Ong, Amy Partridge, Dominika Leitane and Maria Picasso Bouroncle. During their time with us, they wrote a blog about their experience with understanding a global issue, thinking critically about it and then taking action.

During our Active Citizenship program, we were tasked with identifying a specific global issue that we felt passionate about, and design our campaign around that issue in accordance with the values and goals of Think Global – to educate the general public on global issues, and give people the knowledge required to act on those issues.

As a result of our first brainstorming session, it was clear that we all cared deeply about climate change and all the issues associated with it, with the refugee crisis also being prominent in the discussion. It was then that our Think Global supervisor, Faaria, pointed out that we can combine the two and talk about Climate Refugees – the phenomenon of people fleeing from their home countries due to abnormal climate conditions that are a direct or indirect consequence of the climate change brought about by global warming. You can read our blog on Climate Refugees here.

Upon subsequent research, we were shocked to learn the extent to which this affects people across the globe. Indeed, climate change is usually framed within the context of the future – and when talking about the current situation, nature and animals are usually brought up.

We realised that, just like us, most people are probably not aware that climate change is having an impact on people, and not in 50 years, but today!

This is how we came up with the idea of a campaign that is aimed at changing the public’s perspective on climate change – the message that we wanted to convey is that everyone should care about climate change, because it’s happening here and now and it’s having a severe impact on people, and that anyone can make a difference. You can view the video we created about Climate Refugees on YouTube. 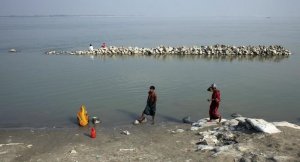 Working on the campaign, we learnt how important the issue was. We felt inspired to take action. We discovered that roughly 25 million people are being displaced by climate change worldwide every year (Norwegian Refugee Council, 2015) and that climate refugees are shockingly not granted the same status and access to rights as other types of refugees. The situation is predicted to worsen in the future with the number of environmental migrants moving within or across country borders exceeding 200 million by 2050 (UNU-EHS, 2015). We recognized how our actions have contributed to this problem and saw how interlinked we are with the global community. Having completed this project, we feel a greater sense of responsibility for our actions and have gained a greater conviction to live sustainably. We became more conscious of our energy use, from switching off lights when not in use to taking the “Tea Time Pledge” to boil only the amount of water we need, and also putting more effort into recycling paper and plastics; we realized that those are all very small and manageable changes that add up to make a big difference.

We were also inspired to try and take action with regards to climate refugee legislation, for example through signing relevant petitions online, and engaging in further research and campaigning to achieve rights for climate refugees.

Overall, we realized that in the near future, the entire world will experience severe changes due to the worsening of climate change, and a lot more people will be displaced from their homes – therefore, preparing for this is of extreme importance. We also identified specific ways in which any one person can act on the situation and make it better, and thus felt empowered by the experience.