We recently hosted 4 UCL students for a couple of weeks as part of their Global Active Citizens Programme – Alyson Ong, Amy Partridge, Dominika Leitane and Maria Picasso Bouroncle. During their time with us, they wrote a blog and created a video about climate refugees. The video can be viewed here.

Climate change will not wait. Neither can we. For climate refugees, tomorrow is too late.”

According to scientific estimations, climate change threatens to cause the largest humanitarian crisis in history. More than 200 million people, largely in Africa and Asia, are predicted to leave their homes over the course of the century to seek refuge elsewhere (either in other places or other countries entirely) due to extreme weather conditions (UNHCR, 2017). This challenge is unlike anything humanity has ever faced – it will affect far more people than World War II, which displaced some 60 million across Europe. A vast majority of the Earth’s population will be affected to some degree.

However, the issue of climate refugees is not one for the future – it is already happening today, and getting worse as time passes. Between 2008 and 2015, an average of 26.4 million people per year were displaced by climate- or weather-related disasters, according to the United Nations – which, for reference, is comparable to the population of Australia (UNHCR, 2015). Yes, that’s right – one whole Australia displaced by climate change every year.

The main issues regarding climate refugees is based on the fact that they are not acknowledged as such (McAdam, 2010). In international refugee law climate migrants are not legally considered refugees, meaning that they have none of the protections officially accorded to refugees (who are defined at the moment as people fleeing persecution) (UNHCR, 2017). No global agreements exist to help millions of people who are displaced by natural disasters every year, and the existing governance mechanisms are not sufficiently equipped to deal with this crisis. There is a critical need for governments to work together and establish national and international legislations to protect climate refugees. 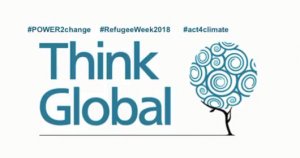 Nevertheless, we don’t need to wait on the government to create change, we can become agents of change through our actions. It takes few steps to make a big difference, not only in helping already existing refugees, but also combating global warming so that there are no more climate refugees in the future. Everyone knows that switching off electricity when you’re not using it, minimizing the use of cars in favor of public transport or bikes, and trying to eat less meat are all realistically achievable things that can make a huge impact on the state of global warming. Additionally, we can “vote with our wallets” and use our consumerist power to let companies know that we support sustainable, sometimes carbon – neutral or carbon – negative companies.

Right now, it’s all about raising awareness, even if it’s just about terminology. You can tweet your local MP asking for climate refugees to be granted the same rights as other refugees, or tell your friends and family about the extent of the issue.