It was a pleasure to be invited, with my colleague Faaria Ahmad, to discuss one of our current European projects with students from the University of East London and Goldsmiths, University of London on Tuesday 1st March, and Tuesday 8th March respectively. 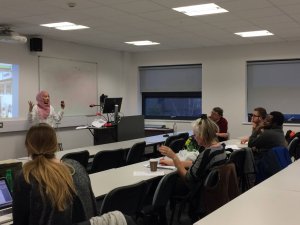 Presenting the project to the student group at Goldsmiths

The “Susy” project we are currently working on is funded by the European Commission, and aims to promote social and solidarity economy (SSE) as an alternative economic model that can help to alleviate poverty. Launched in February 2015 as part of the European Year for Development, we are working in collaboration with 25 European partners on this project, including the Co-operative College in Manchester.

An unfamiliar term for many within the United Kingdom, during the discussions students were encouraged to reflect on meaning of the concept “social and solidarity economy”, and what they understand from the term. It was fascinating to hear of both differences in perspective between students of International Development at UEL and students of Creative and Cultural Entrepreneurship at Goldsmiths, but also of the many similarities. For example, terms such as “social enterprise”, “grassroots”, and “community cohesion” were emphasised on both occasions. We very much enjoyed sharing with students our learnings from our recent European training for the project in Florence about how understandings of the term “social and solidarity economy” differ across European countries according to their individual context and history, and the various ways it manifests itself in each. 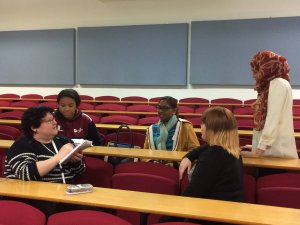 Discussing the project with students at UEL

Having moved on to consider how SSE might be used to create a road out of poverty, students watched a video produced by Think Global for the project, to illustrate best practice in this area. In the video, two of the co-founders of social enterprise and community interest company Zaytoun share how their approach to social and solidarity economy in the United Kingdom and Palestine and the creation of a UK market for Palestinian goods, is helping to create sustainable livelihoods for Palestinian farmers.

We would like to thank the University of East London and Goldsmiths, University of London for the invitation to come to share our work on this project, and the students who attended for their thoughtful contributions on this topic!

To find out more about this project, please visit our project page, and to view more examples of best practice in the field of SSE across Europe, visit the Susy project Youtube page.