In May 2016, Think Global hosted 4 students from University College London who were taking part in a Global Citizenship programme. This entailed intense training at university, followed by afternoons at different organisations. Angela, Chris, Chantal and Moriyah worked on our Supply Cha!nge project- producing a short awareness-raising video (which you can find on our facebook page), tweets, memes and this blog.

How much do you know about supermarket supply chains?

When we began our Think Global campaign about the supply chains of concentrated orange juice in Brazil, we had a few initial ideas. Our pre-existing knowledge of the current situations concerning pesticide use functioned as the locus from which we outwardly extended our understanding of its use and effects. We were familiar with the issues surrounding poor and unsafe working conditions for the workers picking oranges, the lack of health and safety regulations that would ensure protection from injuries and exposure to the multitude of pesticides, and the lack of economic stability for those working these seasonal jobs.

Through gathering statistics and facts about the subject, we became better equipped to push out a radius from this point of departure. Simultaneously, our collaborative processing of this information into a more tangible visual form, as an educational video, constantly reminded us of the harsh and unstopping realities of agricultural pesticide use. As a result, we understood the need to communicate the findings around the issue and mobilise this radius of knowledge to outline a circumference around the global injustices happening today. We recognised the need to raise awareness about the detrimental consequences of pesticide use and draw a line against the violations of human rights towards the workers on the orange plantations. Nevertheless, we understood that such process would entail addressing and even challenging our own personal consumption of concentrated orange juice.

What we have learned

Whilst engaging with the literature, we were able to gain further insight concerning the extent of the problem that plagues Brazilian farmers producing concentrated orange juice.  We discovered that oranges are one of the most pesticide intensive fruit crops that requires the most pesticides per hectare of all export-crops grown in Brazil (Supply Cha!nge, 2015).  Some of the pesticides utilised by farmers are suspected carcinogens, such as Paraquat Dichloride, Bifenthrin and Flufenoxuron, which are dangerous to inhale, toxic for aquatic organisms and toxic for lactation (and currently banned in all EU countries) respectively.  Despite the fact that approximately 75% of the concentrated orange juice consumed in Europe originates from Brazil, the Supply Cha!nge report demonstrates that certain pesticides commonly used on these plantations are not permitted in all or some EU countries.This places workers on the orange plantation in hazardous working conditions that not only violates their human rights but also subjects them to health issues related to pesticide use.

The abundance of their usage is not only worrisome for the health of the consumer, but even riskier for the lives of the underpaid plantation workers. Between 2007 and 2013, the number of reported cases of human intoxication by pesticides has more than doubled, from 2,178 to 4,537.  In the same period, the annual number of deaths linked to pesticide poisoning climbed from 132 to 206. Public health specialists say the actual figures are higher because tracking is incomplete.

What kind of discussions has this opened? 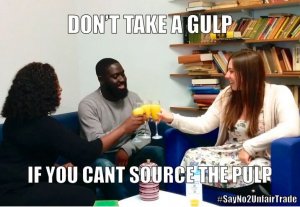 As a result of our examination into the ethics and conducts of European supply chains, our realisation that their actions have caused unlawful damage to those further down the production line has raised numerous discussions. These include the ways commercial corporations worldwide use pesticides and how the states should regulate the use of chemicals, which are harmful to people’s health and the environment, through informed and ethical legislation. In addition to health, we found that our discussions would lead to ways of ensuring that workers’  human rights are respected, and these dialogues would establish some thoughts on how we can influence change within the law to protect workers against unfair trading practices of some multinationals. Finally, we would like to put emphasis on the general use of agriculture on the local and global scales, and to what extent the biodiversities of this spectrum of geographical spheres are damaged by pesticide use.

Overall, our individual experiences of working with each other and Think Global have expanded both our knowledge and our ways of navigating such global issues. We feel that we are now one step closer to becoming global active citizens.