Faaria Ahmad, Programme Manager at Think Global, reflects on race and religion in the UK and asks the question, despite the strides we have made in creating change, what is the change we are hoping for and how will it come about? 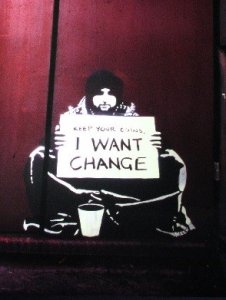 I have this Banksy art on a keyring, “Keep your coins, I want change”. Every time I look at it, I ask myself, what change am I hoping for? Where does this change begin? Do I start by changing myself? Is creating change a lifelong process? The EC funded project, ‘Start the Change’ has been working with educators and young people to answer some of these questions. In the UK, we have been working with schools across London and north east England to speak with young people about the issues they face and how they hope to create change in their communities.

I recently visited a school in East London which focuses on art and music for 16-18-year olds. They have been creating podcasts about issues they are affected by. It was an incredible experience to see these young people in action and hear about some of the concerns they face. The podcast session was looking at the relationship between religion and being LGBTQ. They spoke about cultural, religious and family issues they have faced and how they navigate through their multi-layered identities and find balance between societal and personal expectations.

I interviewed one of the young people after the podcast session; her passion, drive and restlessness for change was inspiring and gave me hope for the future. She told me that she wants to use the skills she has gained through this project to amplify her voice to speak out against those who judge people based on their appearance and give confidence and courage to her peers, to be comfortable with who they are.

It is young Londoners like this who inspire change because she lives the change she wishes to see in the world.

I wish I could say that I have the same level of optimism as her, that I feel that change is around the corner. But road to change is a long one, and although we may inspire those around us to take a more open-minded and inclusive approach when finding solutions for our future, the UK’s approach to race and religion has had its ups and downs. The recent visit to the UK by the UN special rapporteur on racism found that the UK has seen an increase in racism since the Brexit vote. The media, social media and government have played a key role in legitimising blatant racism against non-white British citizens, refugees and migrants.

I grew up in North London, and only when I reflect on the journey of my grandparents and parents, do I realise that although a lot has changed, some things have remained the same.

My maternal grandparents and mum lived in Crouch End, North London when they moved here in 1968 with the intention of returning to what was then East Pakistan. But they never moved back. Despite their love for Jane Austen, Shakespeare, McVitie’s Rich Tea and the occasional fish and chips – it was the racism they faced and heard of which always left them feeling unwelcome. My father, who came here in 1980, has faced racism throughout his life, in work and public. This pushed him to campaign in the 1987 election with and for one of the first Black MPs in the UK, Bernie Grant. He went on to set up a charity after 9/11 to build bridges between faith communities.

There has been a lot of positive change in the UK, for example creating more opportunities for people of colour in universities and work places, anti-discrimination legislation, etc. But with the positives, came the war on terror, the Iraq war, increased stop and search powers, restrictions on asylum seekers given refugee status, greater requirements for migrants, Prevent, and the list goes on.

It is comforting to see a slight shift in politics with the election of Sadiq Khan as the Mayor of London, and we may fool ourselves into thinking ‘yes we’ve done it, finally we will be accepted’– but change is certainly a lifelong process, a process which transcends generations. We need to ask ourselves collectively, what is the change we are hoping for? How will this change come about? I cannot see this change being fully realised until there are structural changes in media, government bodies and education. When we accept our shared history so that people of colour are no longer seen as ‘outsiders’, when teachers aren’t asked to spy on their Muslim students, when our name doesn’t restrict us being interviewed for a job, when the colour of our skin doesn’t increase the likelihood of being stopped by police, when we recognise our duty in making this world a just one – only then can real change have a chance, in this country I call home.