I’ve just returned from travelling in Thailand and Cambodia over the New Year break. My adventure started in Bangkok and I found it certainly lived up to its reputation for being overwhelmed by traffic jams and associated pollution. My adventure also ended in Bangkok, last week – and it was a very different city. Major roads were covered in tents, I could have lain down in the middle of the flyovers such was the lack of traffic, and the biggest road junctions had been turned into open-air pop concerts and markets. It felt like the city had been taken over by a mixture of Reclaim the Streets and the Occupy Movement. 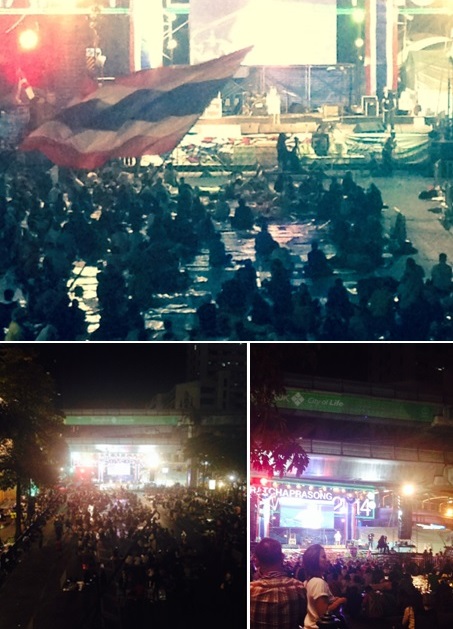 government and replacing it with an unelected ‘council’ for two years, whilst the political system is ‘reformed’. The protesters (the so-called ‘Yellow Shirts’, because of their traditional support for the monarchy) accuse the government of corruption, and are boycotting the forthcoming elections. ‘No elections before reform’ is one of their rallying cries. The government’s supporters (the ‘Red Shirts’) say they won the election fair and square, and that the protesters want to seize the power that they can’t win through the ballot box. ‘My vote counts too’ is their response.

It was fascinating watching this play out. I have to say that my sympathies were with the government’s supporters. They tend to be from poorer rural areas, and from the lower or lower-middle classes. The protesters seem to be mostly the wealthier urban elite, whose main objection is to the populist policies of the government, such as almost free health care and subsidies for rural farmers. But it was a bizarre spectacle to watch a ‘popular revolt’ – especially involving so many younger people – against democracy.

The role of democracy in development is a hotly contested issue. Former World Bank Economist, Paul Collier, in his book, The Bottom Billion, makes the case that if democracy is introduced too early in development and isn’t accompanied by a strong ‘civil society’ to hold politicians to account (for example, free media, trade unions, and civil organisations), democracy might actually hold back development by fostering cronyism and corruption. In the West, we tend to think that liberal democracy is an essential ingredient for speeding up development – witness the attempts to cement it in place in Iraq and Afghanistan, and to promote democracy through our development programmes. We also tend to believe that democracy is the inevitable outcome of development – that a rising middle class in nations such as China will eventually demand democracy.

I thought it might be interesting to try to apply Think Global’s ten critical questions to the issue of democracy in Thailand. Here is my attempt. I’d be interested to know what you think of my answers:

1.) Where is Thailand’s democracy an issue?

It seems that all sides talk about democracy as if it is a good thing. The difficulty is that they disagree on what democracy means. For the Red Shirts, they feel they have won the democratic election. The Yellow Shirts believe that the democratic system is so corrupt that it needs to be stopped, and ‘re-set’, before it is re-started under different rules. (Presumably these different rules would make it easier for the Yellow Shirts to win elections?)

2.) What are the effects of democracy on people and particularly the allocation of resources?

3.) What things can people do in relation to democracy?

At the moment, the Yellow Shirts are trying to close down, and overthrow, the government. They have taken to the streets in large numbers. There are alternative demonstrations taking place – particularly in the so-called ‘Red Villages’ strongholds in the north. I picked up a sense that there is a battle taking place for the future direction of the country. Is it much different from the battles that were taking place in 19th century Britain – the Peterloo Massacre of 1819, or the Chartist movement, for example) over the type of democracy?

4.) Who has the power to make decisions about democracy?

It was only in 1932 that Thailand moved from being an absolute monarchy. Since then, many governments have been ousted from power either by the military, or by the courts. (In fact, only very recently did a government – for the first time – last its full term in office.) So it seems that power to make decisions about democracy is divided between demonstrators (who have shown they can cause a political crisis) and those with power in the military/courts.

5.) Who does not have the power to make decisions about democracy?

This could be ordinary people. I was struck by the fact that the actual number of demonstrators in Bangkok was comparatively small (although they were very noisy, and fanatical). Most people went about the lives as normal.

6.) Are there people who will benefit from democracy?

Those who can win the elections (and those who benefit from the policies of the victors).

7.) Are there people who will lose out from democracy?

Conversely, those who are not able to win elections. Some would say that democracy works best when there is a high chance that power will switch between sides. Therefore, those who lose an election keep faith with democracy because they know their time will come to exercise power. The Yellow Shirts in Thailand have lost the last four elections – they are perhaps trying to overthrow the government because they don’t think they can win in any other way.

8.) How does your life/work link to democracy?

I’ve always lived in a democracy – so for me, I take it for granted as the best system. I found it very challenging, in Thailand, to be confronted by people who seemed educated and thoughtful, who were advocating the removal of democracy. I spoke to some of the demonstrators – and asked them why they were doing this. “If you had the corrupt government that we have in this country, you would be calling for its overthrow, too”, was their response to me.

9) How do we talk about democracy in our community?

We tend talk about democracy as if it is the naturally superior way of governing. There is a view – stated very well in Francis Fukuyama’s ‘The End of History‘ which he wrote in the wake of the collapse of communism – that the whole world is on a journey to become a liberal democracy. 12.5% aid of UK aid goes to matters related to governance, and many of the West’s military interventions have been aimed at promoting democracy. We forget that large parts of the world interpret democracy very differently from the way that we do – and there are many who don’t see democracy as necessarily a good thing. (“Democracy is the recurrent suspicion that more than half of the people are right more than half the time”, said EB White in 1944.)

10) How can the effects of democracy be shared equally?

Perhaps they can’t… at the root of democracy is a battle for power, and so democracy does mean winners and losers. On the other hand, perhaps democracy works best when the system allows for power to be diffuse, with everybody having at least of chance of power.

Our philosophy at Think Global is that there are very rarely black-and-white answers to global issues. We believe the more people get under the skin of global issues – understanding the different perspectives, the complexities and questioning why people hold the views they do – the better decisions they are likely to make in their own lives and thus the greater impact they will have on creating a more just and sustainable world. In the words of Nelson Mandela, “Education is the most powerful tool which you can use to change the world.” Our ten critical questions are a tool which can be used to explore such issues. Why not try them out on a different global issue?

We’ve yet to see how the Thailand political crisis will play out – I see that the government yesterday imposed a state of emergency, and a Red Shirts leader was shot in an attack. The impression I came away with was that there was a titanic struggle for power going on – between the upper/upper middle classes and the lower/lower middle classes; between the north of the country and the south; and between the urban and the rural. And all of it was being played out in the name of ‘democracy’, with both sides claiming ownership of true democracy.

What do you think?