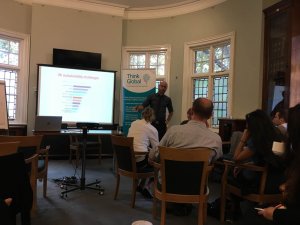 and Friday 23 September 2016, Think Global was pleased to host two workshops in London and Portsmouth. These were part of our SUSY project which seeks to raise awareness about the ‘social and solidarity economy’ (SSE) as another form of poverty alleviation. The workshops looked at the empowerment and transformation of communities through poverty relief and SSE organisations.

The ‘social and solidarity economy’

Both workshops kicked off with a short presentation from Think Global Programme Managers – Faaria Ahmad and Catherine Richardson, on the research we conducted last year. This examined the social, economic and environmental impact of SSE in the UK and globally. During the research, we found that the term “social and solidarity economy” is not broadly understood in the UK and that many organisations who fall within the definition of SSE would not use this terminology. Rather, terms such as the social economy, social enterprises, fair trade and co-operatives were better understood in the UK. Therefore, during our research we took a broad approach and understanding of business models which fall under the SSE umbrella —these would include organisations with principles such as a commitment to making a positive social and environmental impact, collective ownership, democratic decision-making and self-management.