Think Global kicked off Fairtrade Fortnight 2017 with a great show of solidarity yesterday, bringing people together to learn about the experiences of Palestinian small farmers and Indian co-operative workers, and demonstrate their support for the social economy.

Some 30 people joined us for our Sharing Experiences of Fairtrade evening, to meet visiting producers from Zaytoun, as well as Veena Nabar, an Indian economist with extensive expert knowledge of her country’s co-operatives. This was all part of our Speakers’ Tour, organised through the SUSY project, which is raising awareness of the social and solidarity economy as an approach to poverty alleviation. 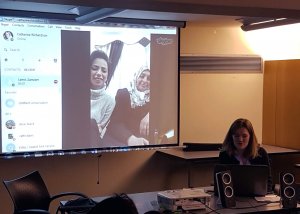 At the very last minute, shortly before the Speakers’ Tour began, we learned that the UK visas for Lamis Zamzam and Bassema Barahmeh, the two Palestinian producers for Zaytoun, had been refused. As a result they were unable to travel to the UK and join our tour. We were very pleased, however, to host in their place Taysir Abarsi, who is a community leader and Director of Zaytoun in Palestine.

At our evening event we managed to connect with Lamis and Bassema via Skype, and they talked to us about their work with Canaan Fair Trade and the Palestine Fair Trade Association. It was great to break through their visa ban in this small way, and to smile and communicate with them despite the miles between us.

Earlier in the day, the speakers had visited Colchester County High School for Girls, where students from their Oxfam Youth Ambassadors group recorded this message of solidarity!

Cathi Pawston explained how Zaytoun began at RISC in Reading as a solidarity project supporting Palestinian olive oil producers by finding a market for their oil. Zaytoun’s olive oil became the world’s first Fairtrade-certified olive oil in 2009; other products include medjool dates, almonds, maftoul (a large grain couscous) and za’atar (a spice blend).

Taysir Abarsi shared his perspective from Palestine. In a region where agricultural land may be built over or lost through the construction of illegal settlements, farming can be a precarious way to earn a living. The support and solidarity from Zaytoun and Fairtrade certification helps the community to stay resilient.

Veena Nabar then talked about the co-operative movement in India, a country in which co-operatives play a huge role, particularly in the agricultural sector. Boosted by the government in the years immediately following independence, the sector then suffered due to excessive legislation. In recent years there have been changes in the laws which have provided a more healthy and level playing field. Some rural co-ops have been instrumental in reducing migration from villages to urban centres. Others have been vital to rural development, including post-tsunami reconstruction, as demonstrated by Veena’s film about co-ops in the Andaman and Nicobar islands, viewable online at www.youtube.com/watch?v=DXc8TyA0VAA.

We continued our discussions informally over snacks (including tasting Zaytoun’s delicious olive oil) and left the event inspired by these examples of co-operation and solidarity.

The photo at the top of the page shows Atif Choudury (Zaytoun UK) and Taysir Abarsi (Zaytoun Palestine) with Veena Nabar in the middle.