There’s a photo doing the rounds on Facebook and Twitter at the moment – it’s a screenshot of the BBC News website story about the disaster in the Mediterranean this week. The BBC’s headline was ‘Major’ emergency as boat capsizes’. Somebody has crossed this out and changed it to ‘Major’ emergency as many lives feared lost at sea’, and edited the article to replace the word ‘migrants’ with the word ‘people’. 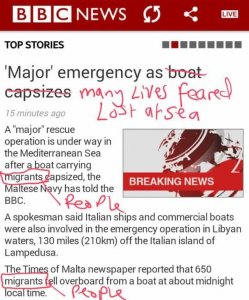 For me this struck home about how easy it can be to dehumanise the story of migration – and the terrible situations which desperate people are fleeing from.  (I won’t mention a certain newspaper columnist’s name in this regard.)

Today, the film The Good Lie comes out, about the plight of young orphans from the Sudanese war, and follows three of them in particular as they are helped to escape to the US and it follows their struggles to integrate into a very different society and avoid the dangers like drugs and crime which await them.  Now, I have to admit that I always blanche a little bit at films which portray foreigners as helpless victims and westerners as the superheroes.  (I recently re-watched The Killing Fields, which does just that in my opinion.)  So when I saw The Good Lie, it was with some trepidation.

My conclusion: I think it is a good, thoughtful film.  It’s made for a mainstream audience, and it does have those moments of awkward cliché and stereotyping, with the American ‘heroes’.  But – overall I think it helps to challenge the dehumanisation of migrants that I started this blog post talking about, by telling their story in a sympathetic way.  Anything which helps with that, is good in my view.  I left feeling positive that it will help to challenge the current narrative about migrants.

The wonderful Damaris Trust has produced some resources which can be used in schools or community groups to discuss the issues behind the film.  They can be downloaded here for free, and used to lead discussions.

Let us know what you think of the film.