Ema Jackson, Campaign Manager at Send my Friend to School talks about their recent Parliamentary Action Day campaign, the inspiring students who took part and the need to make schools a safe haven for all.

Not that I ever need a reminder of the importance of global learning and putting young people in the lead – but if I did, the ‘Send My Friend Parliamentary Action Day’ would certainly do it. It is without doubt my favourite day of the year. It sees a group of ‘Campaign Champions’ aged 13-15, selected as national representatives, taking Parliament by storm – eloquently, confidently and with pure determination to make the world a better place. 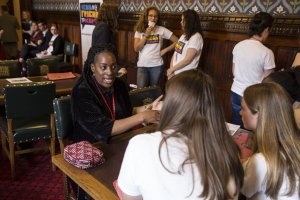 This year the ‘Campaign Champions’ represent the 175,000+ young people taking part in Send My Friend to School’s campaign to #MakeSchoolsSafe – and they used their Action Day to take their collective message right to the heart of Government. Outside Parliament they created an unsafe school scene and unfurled a banner that said ‘Make Schools Safe’ to raise awareness. Inside Parliament they met with lots of parliamentarians, including Stephen Twigg MP – International Development Committee Chair, Kate Osamor MP – Shadow Secretary of State for International Development, Minister Harriett Baldwin – responsible for the UK’s work on international education, as well as many others. They topped off the day with a trip to 10 Downing Street to hand-in a campaign photo-book for Prime Minister May.

And what is the change they are demanding to see? They want to Make Schools Safe – everywhere and for all children”

They know schools should be safe havens. But that unfortunately for millions around the world, school can be a place of violence, with 246 million children experiencing violence at school every year. That’s why thousands and thousands of UK young people have been creating eye-catching paper safety signs and presenting them to their MPs to send a sign to the Government that schools across the world must be protected. And it’s working! The Government heard their call to sign the Safe Schools Declaration, an international political commitment by countries to do more to protect schools during armed conflict, recently becoming the 74th country to sign. Now the youth campaigners are pushing the Government to implement the declaration and encourage other countries to do the same.

The campaign is facilitated by brilliant educators across the country – teaching young people about global citizenship, our interconnected world, the importance of using their voices in solidarity with others to create change – and empowering them to do just that. Send My Friend produce a Teacher’s Pack each year with learning resources such as videos and case-studies, activities to encourage critical thinking, action templates as well as tips on engaging MPs and journalists. The pack is flexible, able to be adapted across ages and subjects – so that teachers and students can be creative. And that they are – writing songs, taking aerial photos, getting in the local paper, making videos and much more!

It’s a powerful example of global learning in action on a mass scale. Send My Friend to School is a coalition of charities and teacher unions, including Think Global, Oxfam, National Education Union and many others. They see what I saw on the Action Day – that empowered young people are an unstoppable force for change.  It’s our responsibility as campaigners and educators to engage this next generation of passionate activists and give them the tools to create the world they want to see – it’s their world after all. Interested? Download your Teacher Pack today and get started!