Humanity & Inclusion (formerly Handicap International) works with schools and youth groups in the UK, providing support for learning on areas of their work. They particularly focus on the impact of explosive weapons like landmines and cluster munitions on young people around the world. As well as sending free teaching resources they also deliver talks and assemblies in schools when possible.

Here they talk about the forgotten victims of conflict.

Of all the things that young people in the UK might associate with the war in Syria, disability is unlikely to be top of the list? Much has been written about the conflict but few people realise it is one of the most disabling wars in history. Over two million people have been injured[1] and one in five Syrian refugees now has a disability[2].

The changing nature of conflict is one of the main causes of this. Battlefields in the 21st century are places where people live, work and go to school. Tragically this has meant that the number of people killed or injured by explosive weapons such as cluster bombs or mortars has nearly doubled in past six years. When weapons like these are used in populated areas nine out of ten victims are civilians![3]

All too often our teams of physiotherapists, orthopaedic technicians and others hear stories like that of 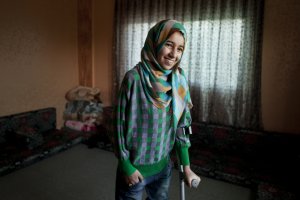 14-year-old Roqaya who was on the phone at home when a shell exploded nearby. Both of her legs had to be amputated at the knee and she didn’t know if she’d ever be able to walk again. Humanity & Inclusion physiotherapists visited her in hospital and started supporting her recovery, providing physiotherapy sessions and arranging custom-made prosthetic legs for her.

Stop Bombing Civilians
Since 2012 Humanity & Inclusion has provided rehabilitation care to over 110,000 injured and disabled Syrian refugees and fitted nearly 10,000 people with artificial limbs of assistive devices. Half of all the injured Syrians we have supported have been injured in bombings and fractures, spinal injuries and even amputations are amongst the most common injuries[4].

Unlike Roqaya, injured people and people with disabilities often remain hidden victims and are sometimes unable to access help even when is does exist.

Raising our voice in the UK
We work with schools to raise awareness about the forgotten victims of conflict. Understanding the human impact of war is one thing but we always hope that pupils will respond to what they’ve learnt by taking action, whether that’s raising awareness amongst their peers, supporting a campaign or raising funds.

Each year, our activities in schools culminate with the Forgotten 10 Challenge, 10 days of activities from 1st to 10th December. Assemblies, tutor group sessions, fundraising and whole-school events take place and are often based around the free teaching resources we send out. Not only is 3rd December the International Day of People with Disabilities it is also the anniversary of treaties banning both landmines (1997) and cluster bombs (2008).

This year sees the 20th anniversary of the Mine Ban Treaty and we are hoping to support more schools to get involved than ever before. The free resources are listed in our Action pack, which can be downloaded here.

[4] Syria, a mutilated future, A focus on the persons injured by explosive weapons, 2016, Handicap International