When you think about Ethiopia, what comes to mind? Well, unless you are very familiar with the country, most likely you will think about the famine in the early 1980s, the Michael Buerk news reports, and the start of Band Aid. If you know something about the country in more recent times, you’ll probably be aware of the rapid development that has taken place in parts of the country, particularly Addis Ababa.

There is a film which is being released on 6th March, co-inciding with International Women’s Day on Sunday, which I think is truly remarkable and will show you some sides of Ethiopia that you are probably unaware of. 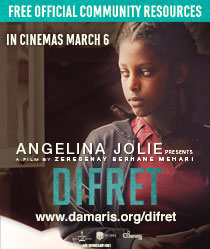 The film is called Difret. I’ve had a sneak viewing of the film courtesy of Damaris Trust, and I found it inspiring. It is set partly in Addis Ababa and partly in a village three hours outside of the capital. It tells the (true) story of Hirut, a 14 year old girl who is kidnapped and raped by men on her way home from school. Abduction into marriage is an ancient Ethiopian tradition, and still common. Hirut shoots and kills her would-be husband whilst escaping.

The film tells the story of the attempts by Meaza Ashenafi, a women’s rights lawyer, to defend her at her trial for murder. In the process, she comes up against the myriad institutions which do everything they can to protect the patriarchal structure of Ethiopian society.

It is a challenging film. It shows a society in conflict as it goes through struggles for equal rights – and it reminds me that those struggles are similar wherever they take place in the world for whatever the oppressed group. Be they women, LGBT people, poor people, or disabled people. There will be those who have a vested interest in protecting the status quo. And the progress will happen because of the bloody-mindedness of a dedicated few who are prepared to risk themselves in the inevitable conflict.

The film also challenges stereotypes about Ethiopia. What the film shows of Addis Ababa doesn’t look a lot different from what you’d see in any other city: cars, traffic jams, apartment and office blocks, stylish clothes, and lots of people going places in a hurry! And what the film shows of rural Ethiopa is stunning in its greenery and beauty.

Damaris Trust has produced some great resources to go alongside the film, including a really good discussion guide. You can download them here: http://www.damaris.org/media/difret. If you see the film, let me know what you think by posting a comment below.