Flicking through the Guardian news app on my mobile phone yesterday, a particular headline caught my attention: “Joy as Sierra Leone’s last Ebola patient ends treatment but grief and fear remain“. It describes the ‘red carpet’ treatment for the woman, and how medical staff danced and sang as Adama Sankoh, 35, left hospital. One worker in full protective suit made the Usain Bolt ‘arrow’.

I’ve taken a close interest in Sierra Leone since studying its recent history in a module for an International Development course at the Open University. It’s a country with potential riches, including mineral wealth, but which has faced huge hurdles of injustice, and its people have been ravaged by recurring civil war (actually brought to an end in the first military intervention of the Blair government). There were signs that things were really changing for the better in Sierra Leone when Ebola struck – and grabbed worldwide headlines.

A few things hit me when reading the article yesterday.

Firstly – that this news of cautious success will receive probably around 1% of the coverage that was given when Ebola was raging out of control. With all of the dire news that we live with every day, isn’t it wonderful to hear some of hope?

Secondly – that this progress hasn’t happened by accident. It has happened because of human intervention. Deliberate actions by the international community, foreign governments, the Sierra Leone government, and countless individuals both in Sierra Leone and abroad. It is an example of how we can have agency in the face of awful situations.

Thirdly – that Britain has played a major role in this success. Within weeks of the crisis unfolding, by the beginning of November last year, the UK had committed £230m, was operating 3 Ebola laboratories in Sierra Leone, was building 6 treatment facilities, was training 800 health workers each week, and had deployed 800 military personnel. Support has been consistent ever since. This would not have happened without the UK’s commitment to spend 0.7% of its GNP on international development. 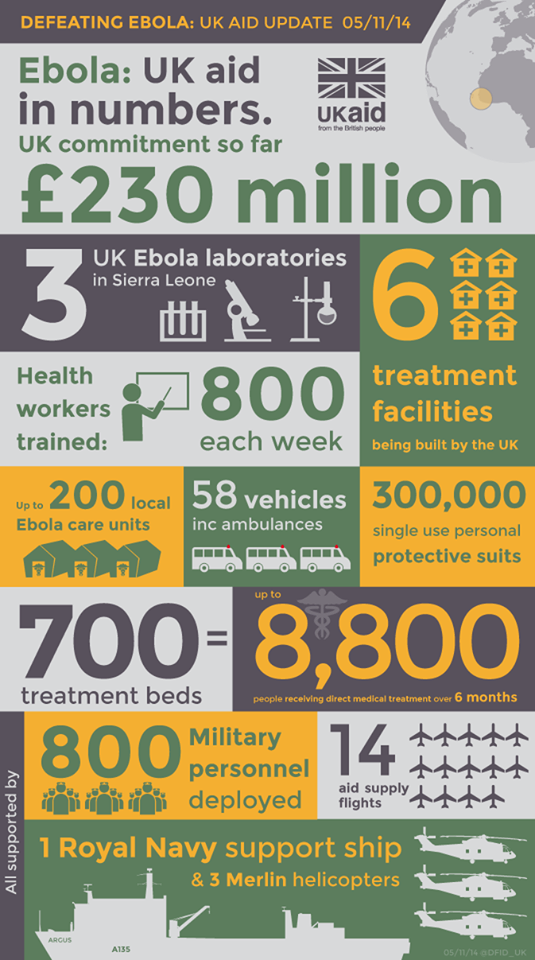 Finally – support for international development amongst the UK public has been falling consistently over a number of years, according to the Aid Attitude Tracker. One of the reasons for this is the feeling that aid doesn’t work. And whilst it is important to be critical about aid, and to recognise the failings, is it any wonder that support is falling when the success of aid – as with Ebola – gets such little attention?

Think Global and Bond have been collaborating on a project with international NGOs looking at how to Build New Responses to public attitudes to development, and we’ve recently published a toolkit on this.

Let us know what you think.